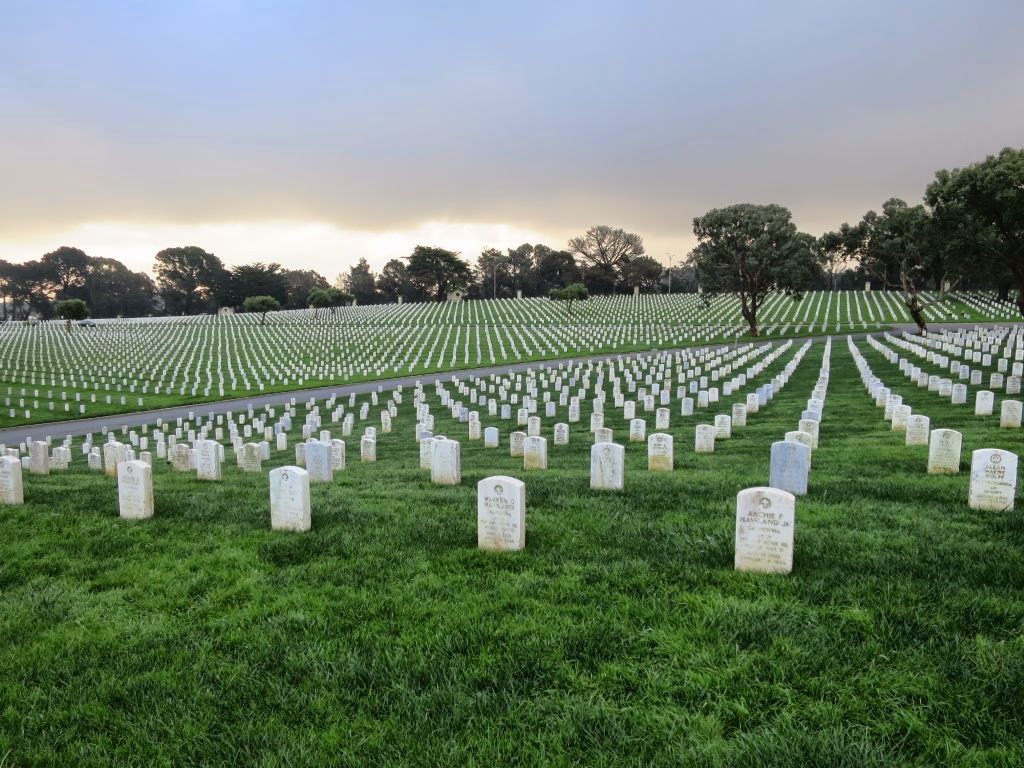 Wreaths Across America takes place at 12:00 EST across America and each year on the second Saturday of December. Of late at Golden Gate Cemetery in San Bruno, it customarily had been held at the base of the dominant flagpole visible from the highway. This year, it was held more in the interior of the campus with a relatively smaller group of attendees than in years past. However, it was no less exceptional.

The theme of "Honor, Remember and Teach" was again emphasized. As part of the annual program a wreath was dedicated to each branch of the service to pay respect accordingly. The Sons of the America Legion and the Patriot Riders were also in attendance, as they are each year. POW and MIA were recognized with great reverence as well.

The keynote speaker was Col Grace Edinboro, who is an Iraq war veteran and member of Civil Air Patrol in the Sacramento area. Col Edinboro grew up in San Francisco, was part of the San Francisco Squadron 86, and then went into the National Guard and served in Iraq. She spoke with great humility and grace detailing some aspects of her service both overseas and back home. Lt Col Edinboro will be retiring in April 2015, moving to Concord, where she will continue her CAP career. We at Squadron 188 are looking forward to hosting her for an evening to further speak to her experiences both within US Army and CAP.

The ceremony began with a bagpipes playing, a chill in the air and a beautiful blue sky in San Bruno. Squadron 18 did their usual great job providing the color guard. The ceremony is very respectful and short.  The laying of the wreath is everything. The moments with the wreaths are very personal:  Seeing the name and touching the tombstone brings you face to face with the life of that soldier. You can personally say thank you and this wreath is my promise that you will not be forgotten.

The ceremony was attended by veterans as well as families that lost their children. All in all it was a very moving ceremony that we felt blessed to be a part of. Participating in this memorable event says we at CAP understand the importance of service to our country and that it is an honor and privilege to remember those who served before us.

An interesting announcement was made prior to the wreaths being distributed for placement after the formal program was over; all tombstones are to have a wreath placed upon them except ones with the Star of David on them. To ensure I heard those instructions correctly (as I had never heard of such a thing in years past), I inquired about the same to make sure I did not inadvertently do something incorrect. Apparently, earlier this year the JWV (Jewish War Veterans) in working with WAA made a request to ensure wreaths were not laid to rest upon the graves of Jewish American soldiers. Read about it here: http://www.wreathsacrossamerica.org/honoring-jewish-headstones/

In paying respect to those who paid the ultimate price for our values, freedom, and way of life, it is essential we always respect the sensitivities of the diverse communities our great nation has. This was a warm lesson learned this year around and I am sure many other such requests from different communities will come about in time. This diversity is our strength as a nation and for each of us to be a part of the beautiful mosaic that is "America" makes participating in such respectful ceremonies for our nations heroes all that much more special.

This was the first WAA program that Majs Chris and Kathy Johnson attended. According to Maj Chris Johnson, I was proud to represent CAP and to see the cadets so well turned out and professional! What saddened me was the small turn out. One would think thousands would come to pay their respects. Makes me think most Americans don't realize the freedoms we have and the cost involved to keep it.

Just driving along the frontage road to the cemetery was a moving moment. Looking at the 10s of thousands of graves, all lined up, all the same, gave one pause to reflect and well up with gratitude to those that gave all and to those that lost a loved one.

One thing that stood out was the commitment and dedication of the Patriot Guard Riders that show up not only for an event like this, but to many of the interments and returning soldiers. They will go so far as to ride through the cemetery just to pay respects.

A key take away from the event is that we could do more to thank, respect, and honor our vets, both alive and dead. As printed on the front of the program, "don't say I SHOULD HAVE, say I did.