In Honor of A1C Ken Sturgill

As most of our CAP colleagues in California Wing will know by now, Airman 1st Class Ken Sturgill passed away earlier this month while attending USAF training in Texas, at the age of 21. 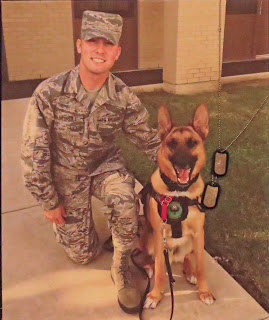 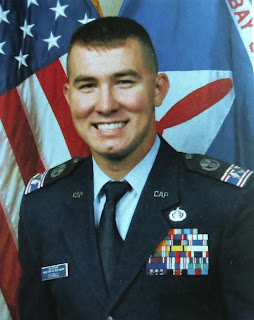 A1C Sturgill was said to have graduated in the top of his basic training class of over 700 recruits. Before that, he served in CAP, where he had achieved the rank of Captain. 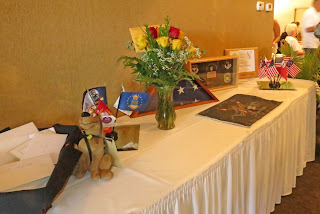 Known to many in CAP as “K3”, he was a long-time cadet member of CAP, serving in the East Bay Cadet Squadron 18 in San Francisco Bay Area’s Group 2 (see also Squadron 18’s Facebook link).

Although I never had the honor of working with or meeting K3, many of my CAP colleagues have told me how much they treasured working with both K3 and his parents, Maj Kenneth Sturgill and Maj Tammy Sturgill.

K3’s memory is a powerful reminder of our CAP core values of integrity, service, excellence and respect and an inspiration to integrate these values into our own lives each and every day.

Many of our members attended events celebrating K3’s life, on the weekend of 16 and 17 July 2016.  I attended and was very moved by the Final Honors ceremony at San Francisco National Cemetery, at the Presidio, where K3 was accorded full military honors and where both CAP and USAF representatives came together to speak about K3’s life of commitment and service, as well as the sacrifice that he and his family have made. 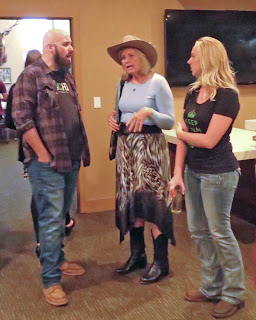 I was sorry to not have had the chance to meet K3 in life and yet I treasure the love and gratitude that so many expressed on that Sunday.  K3, you live on in the hearts of your family and many friends!

Photos from the celebration of K3’s life and from the Final Honors follow. 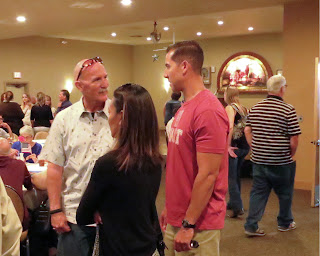 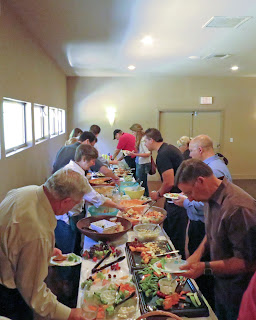 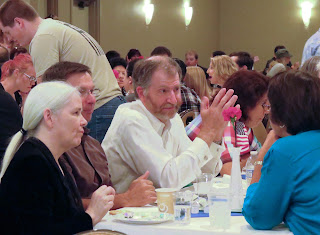 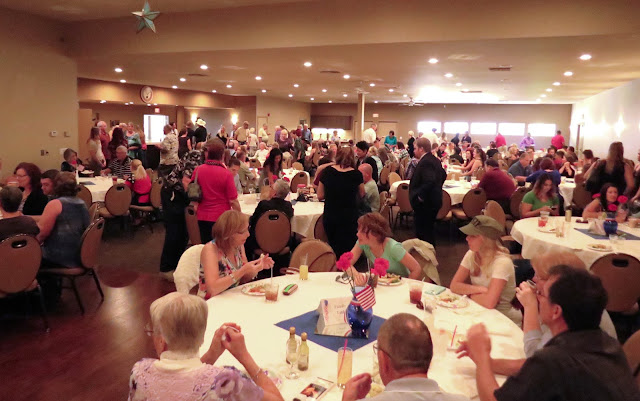 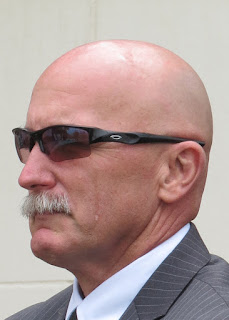 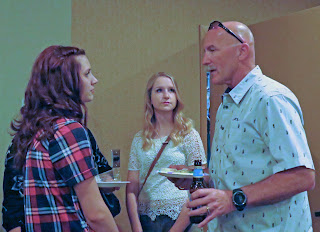 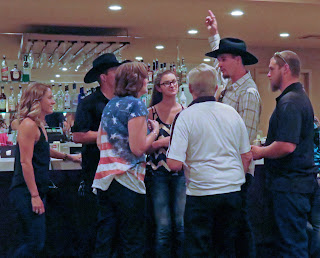 Posted by Karin Hollerbach Capt, Amelia Earhart Squadron 188 CAP at 9:39 AM No comments: 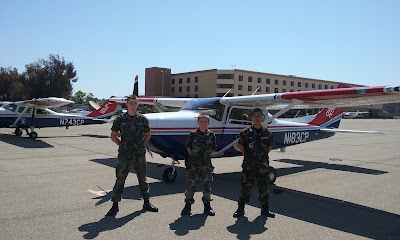 2d Lt Michael Gross (Squadron 10) and I departed Oakland at about 3pm on Sunday afternoon and arrived at San Luis Obispo at about 5pm, after an uneventful flight that included a practice approach into KSBP.   We were greeted by ACI Jet’s excellent staff who directed us to our tiedown spot next to numerous other CAP plans on the ramp. 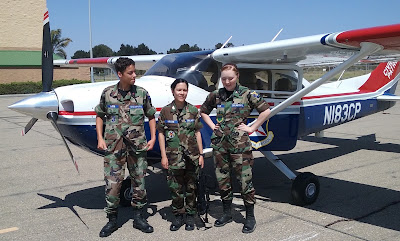 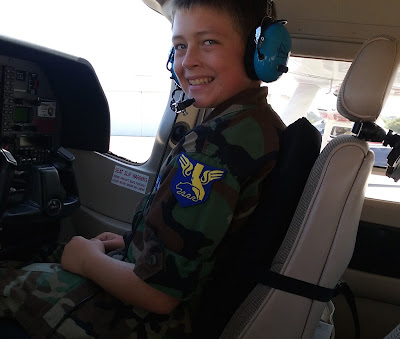 A quick call to Lt Col Nelson resulted in the dispatch of a CAP van from Camp San Luis Obispo to pick us and a few other pilots up and take us to camp (a 20-30 minute drive).  At camp we retrieved our keys from the billeting office and our driver dropped us off at our building.  Various accommodations are available on base from open barracks to private rooms with shared bathrooms to private cottages ranging from free to $50/night.  My room was comfortable and recently remodeled. After getting settled, transportation picked us up and took us to the mess hall, where we had a decent meal prepared by kitchen staff made up mostly of Cadets, after which we were taken back to our rooms for the night. 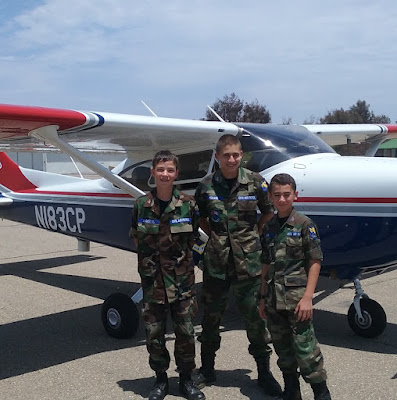 Up again at 6am the next day, transportation again took us to the mess hall for breakfast, and then to the airport for the 8am safety briefing.  Half of the planes would take Cadets south to Santa Maria, three Cadets at a time, the others north to Paso Robles.  Having been assigned to Paso Robles last time, I was excited to find out that my plane would be going to Santa Maria – which is much cooler than Paso, being closer to the ocean.

Shortly after the briefing, cadets arrived at the airport. I was assigned three excited Cadets for my first flight.  I went over the chart, weight and balance, and safety with them before obtaining our flight release.  Out to the aircraft we went, buckled up (having previously performed the preflight) and headed to Santa Maria.  A few maneuvers along the way, and we quickly arrived at Santa Maria where one of the Cadets from the back seat was swapped into the front seat, and we loaded back up for the return flight.

Upon arrival back at San Luis Obispo, Lt Gross and three additional Cadets were ready to take our plane out again.  Shortly before Lt Gross was expected to return, I was assigned three more Cadets and the cycle continued for a day and a half until all 195 Cadets had been flown using 13 aircraft and more than 20 pilots. 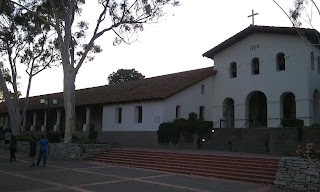 In all Lt Gross and I flew six flights each, 18 Cadets total and 12 O-Rides.

My favorite memory was when I was working with my last three enthusiastic Cadets.   Two of them are hoping to become Air Force pilots.  They are well on their way because they quickly and accurately answered all my questions about lift, drag, etc… as well as weight & balance and magnetic heading vs true heading. I was very impressed!

Another highlight of the trip was dinner at Mo’s Smokehouse followed by ice cream at Batch on Monday night.  The walk between Mo’s and Batch took us past the historic Mission San Luis Obispo de Tolosa founded in 1772. 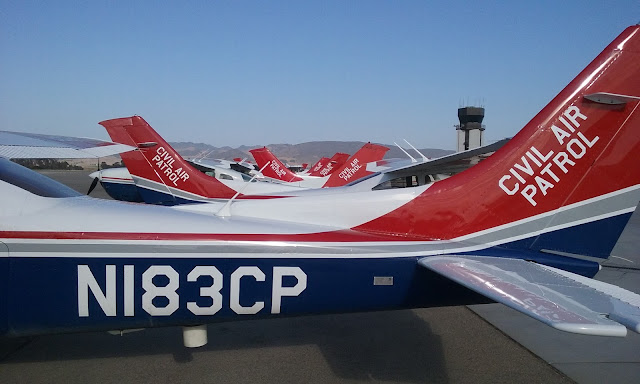 Posted by Karin Hollerbach Capt, Amelia Earhart Squadron 188 CAP at 10:59 AM No comments:

July’s All Hands meeting took place on the 5th of July.


A warm welcome to our newest member, SM Dhawallah Aisien.

June was another busy month for our squadron, including multiple missions and training events.


Awards, ES Ratings & Professional Development
Congratulations to all of the following members and thank you for your dedication to CAP and hard work:

This month’s aerospace moment was a timely presentation on Juno.

We were also reminded that Lt Col Roger Glenn has been a member of our squadron since 1989, as mentioned in Vol 1 of the Logbook. We have a printed version to prove it!  Thank you, Lt Col Glenn!


Posted by Karin Hollerbach Capt, Amelia Earhart Squadron 188 CAP at 10:10 AM No comments:

Students, for example, are evaluated on their familiarity with UDF equipment and techniques, and on their ability to put the DF equipment into operation and successfully find a practice beacon within a reasonable period of time.

Capt Jordan Hayes served as base Mission Radio Operator (MRO) during the training.   Among other things, this enabled participants to call in their ELT search progress on the radio, simulating true in the field conditions, where UDF teams are in radio communications with base staff.

Addendum:
On July 12, Lt Col Tinnirello and Lt Chavez hosted a final evening of hands-on UDF training, with the trainees searching for and finding a hidden training beacon.  They were given two lat-long points, which they plotted out to start their search, and then went to show off their newly acquired skills:  Lt Chavez acted as simulated Incident Commander (IC) and had the beacon hidden in his home.  When the team successfully found the beacon, they were rewarded for their efforts with real, homemade chocolate cookies - now there's incentive!

Thirteen students took the class, including 4 Mission Pilot (MP) and 9 Mission Observer (MO) students.  All 13 passed their test and are eligible to move on to the air portion of their training.  Congratulations to all!

Comments from various students during the training indicated that the ground school was fun and at times slightly overwhelming, and packed a lot of information into one weekend - exactly as it should be.

Many thanks to project officer, Capt Jordan Hayes (Squadron 188), for organizing and managing and teaching at this event, and to our staff, who helped make it happen and included:


The air portion of the next training will be held in July, based in Fresno.