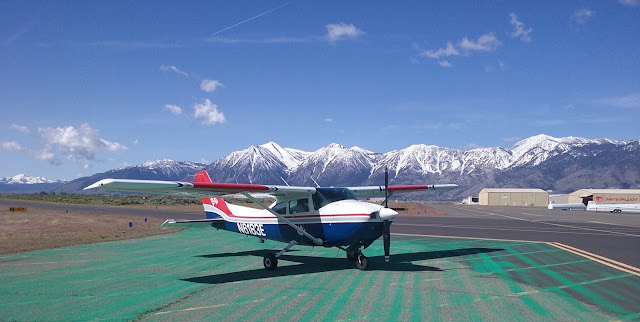 The plan was to arrive the day before, but thunderstorms and a forecast for icing prevented the flight from Livermore to Minden as planned. As a result, I flew up the next morning after the storm had passed.

I arrived at 9 am to find three gliders and the local tow plane staged at the Rwy 34/30 intersection.   After emptying the tow plane of everything that wasn’t tied down, so as to be as light as possible, I received a briefing of the local procedures.

Since there were three gliders, each had a designated area for towing to, for de-confliction.   Winds favored 34 and before I knew it I was waved onto the runway by the ground crew.  I made my radio call “CAP 483, taking runway 34 for glider hookup and tow” and lined up in front of the glider.  The ground team hooked up the tow rope and the glider pilot called over the radio to take up slack.  Then with a wag of his rudder he signaled he was ready to go.  Another radio call, and off we went.

Right away, the glider pilot radioed to slow down, he was indicating 68 knots, although I was indicating 63.  I pulled back to an indicated 60 knots.  Altitude gain was slow and the ride was bumpy as we circled over the airport to gain altitude to avoid dragging the glider too far away from the airport before we had sufficient altitude.  We continued eastbound as I tried to maintain a consistent airspeed in the turbulence.  The glider was bounding around as well.  Several times I wondered if they were “boxing” the wake, or trying to drag my tail around to signal a turn.

We arrived at the schoolhouse with the purple roof below the requested altitude of 7700 ft, so I commenced circling when at about 7500 ft my airspeed when to “0”.  We had just hit a good amount of sink. I pointed the nose down and contemplated releasing, but the glider pilot beat me to it.  I dived back towards the airport, made my radio calls and made an uneventful landing on 30.  Winds had died down now, and were favoring 30, so ops moved to the large ramp next to 30.  I shut down and waited for the next tow.

Towing from the 30 ramp is different because gliders stage off to the side of the runway. As a result, we were not lined up with the centerline.  This took some getting used to. 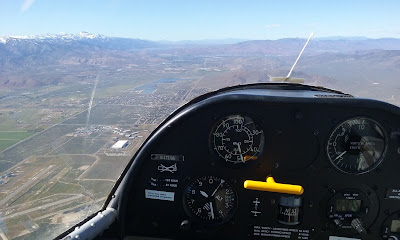 The next glider pilot tested my knowledge of the signals by making no radio calls. I watched the ground crew to know when to take up slack and when to stop.  Then I watched for the wing to be raised and the rudder wagged from the glider to know when he was ready.   Off we went, down the runway, the tow plane bouncing off the runaway as we crossed the 34 intersection.  A left 270 departure and we headed southeast to the drop off location for this glider.

I ran into lift (indicated by an increase in airspeed without control movement) on the way so I circled back for the free ride.  We climbed, first 1000 ft/min, then 1500 ft/min.   In no time, we were at the requested 7700 ft.   The glider released, and I returned to the airport and waited for the next tow.

Later the glider pilot/instructor thanked me for finding lift, but reminded me that they were training and couldn’t give the glider to the student while circling in lift :)

As the day progressed, winds, turbulence, up and down drafts increased, and on one takeoff I found myself contemplating releasing shortly after liftoff as the plane was not climbing. In fact, it was returning to the runway.  This went on for several seconds as I reached for the release when suddenly we hit an updraft, and up we went.  On this same tow, nearing the drop off location, altitude gain stagnated as I circled around for several minutes searching for lift while the VSI was flat.  I decided to give up on this area and fly out northeast.  Finally, we found some lift and we were able to climb up to 7700 ft and release the glider.

After two days and 19 tows I finally got my turn to fly the glider.  Having four prior glider flights, the instructor let me have the controls for the entire time.  After a challenging crosswind takeoff, and bumpy ride up, we released at 8000 ft.

I unsuccessfully hunted around for lift. It seemed things had died down for the day.  But then, just as we were setting up for a downwind to land, we caught the edge of a thermal.  I quickly banked to remain in the thermal and watched the vario go from 1 to 2 to 10 knots up!

Another glider joined us in the ascent and soon we were at 10,000 ft with a glimpse of Lake Tahoe.   The thermal topped out and we again hunted around unsuccessfully for lift.  I decided to return to the scene of the crime, and as before, when setting up to land, we caught another thermal and rode it up to 9500 ft where it waned again.  I wasted no time going back to the origin and caught it again!

We probably could have ridden it again and again, but after an hour and 15 minutes we decided that the ground crew probably wanted to go home.  What a great way to cap off two great days of towing! 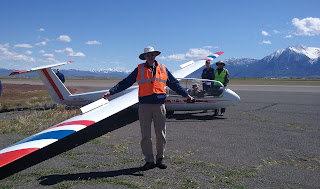 Click here for a story from a TV station in Reno.  And more media coverage here. 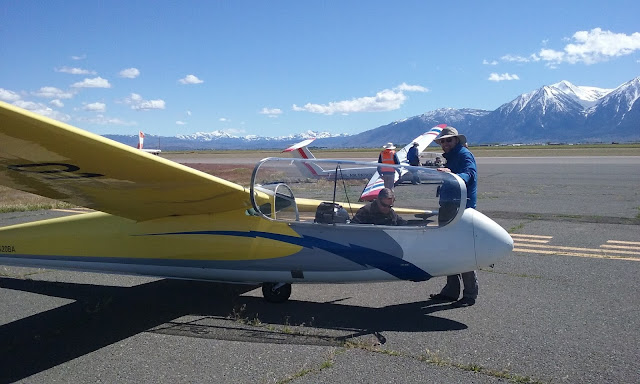 I gave over 7 hours of instruction, including a 1.7 hour instructional flight (check out the flight trace on Squadron 188’s Facebook page).

Col Pierce showed up without the intention of soloing, but he decided we were infectious and he just "had to" make it happen.

The PAO-based SUV towed N420BA, the Byron-based glider, from Minden to Carson City for its annual and miscellaneous repairs.

Aerotow is hard to master, and it's a lot like air-to-air refueling (an observation first made to me by Squadron 188's Maj Mark Fridell, who is far better at aerotow than he has a right to be given how few glider flights he's taken).  I asked everybody what kind of flying they had previously done.  More than half had done air-to-air refueling. 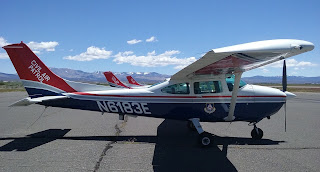 Air cools at about 4.5 degrees per thousand feet.  Dress for the altitude you'll fly towards, because it can be 20-30 degrees colder at altitude.  (This is a good thing - it meant the snow stayed in the mountains rather than flood the Carson Valley, so I was able to drive in.)

If you get to 9,000 feet, you can see Lake Tahoe over the Carson Range.


Posted by Karin Hollerbach Capt, Amelia Earhart Squadron 188 CAP at 6:41 AM No comments:

Squadron 10 is one of nine units within the San Francisco Bay Group 2. The squadron, formed in 1974, was named in honor of Jon Kramer, who died in 1968 during a search and rescue mission.

At the event, Squadron 10 cadets presented the colors. Distinguished guests included Lt Col Brett Dolnick, Group 2 Commander; Lt Col Michael Prusak, CAWG Vice Commander (NorCal); and others.  In thanks for his service, Capt Stephenson was presented with a commemorative plaque. Following the service, there was a celebratory reception with pizza and cake.

Group 2 is grateful to Capt Stephenson for his dedicated service in supporting CAWG and is proud to now welcome Maj Lam into her new leadership role as commander.

Capt Stephenson joined CAP in 2009, and became very active in Cadet Programs and Ground Search and Rescue.  Besides serving as IT officer of Squadron 10, Capt Stephenson achieved the Ground Team Leader rating and served as the squadron’s Deputy Commander for Cadets.

Maj Lam has a long history serving the country, starting as an ROTC cadet and serving now as a senior member. Her record includes being a Gill Robb Wilson Award recipient; being named Pacific Region Safety Officer of the Year; achieving a variety of emergency services ratings, for aircrew, base staff and ground teams; and serving the squadron as Deputy Commander for Seniors.

Maj Lam’s plans for the squadron are “to continue to produce quality and professional volunteers from Group 2 and CAWG in search and rescue to live up to the namesake of our unit. And I am also committed to developing responsible citizens and leaders through our Cadet and Aerospace Education Programs.”

The squadron held / participated in the following events:


The trip seems to have been well worthwhile, as the following comments illustrate:

"In addition to interacting with members from places as diverse as Alaska and Hawaii Wings, I enjoyed learning more about what resources Civil Air Patrol has to offer for us at the local level." - 1st Lt Spears

"It was great to hear about the exciting communications testing Arizona and Nevada Wings are spearheading. It was really eye-opening to understand and see what challenges other states are facing and how they are overcoming those challenges." - Maj Wang


"It was great to see so much enthusiasm for our Mission. Additionally, I learned more about National issues (including funding) and Aerospace Education, which I have been interested in learning about. I also learned about some new initiatives in CAP, including the Unmanned Aerial System program." - 1st Lt Roberts

Renewed/New ES Ratings
Congratulations to the following Squadron 188 members for investing energy in renewing and/or achieving new ES ratings, thereby continuing to strengthen our Squadron's and all of California Wing's ability to provided key SAR and DR services:

Further congratulations to the following members for their well earned awards and their investment in professional development:

For more information on how to participate in the following events, please contact the individuals listed:


Wing safety staff requested that all units have a Safety Down Day with an emphasis on Mishap Reporting. Squadron 188 took the opportunity to use the time to have an interactive review of safety documentation.

We covered general CAP safety programs (e.g., safety documentation, Safety Beacon publications, Squadron 188 Safety Bulletin Board, and responsibilities). An area of emphasis was to use examples of the mishap reporting process and to have focused discussion about accidents, the review process, and the results.

Thanks to 1st Lt Roberts for leading these discussions.

ON the Air or IN the Air (from cap.news)

The following story about Squadron 188 member Ken Wayne is taken from the Civil Air Patrol Newsroom.

“I didn’t know much about CAP, but he told me I’d get to fly a 182 with a slick G1000 in it, and that was appealing,” said Wayne, a longtime reporter and anchor for KTVU-TV, the Fox affiliate in San Francisco. “I also missed the camaraderie of the military and service aspect, so it felt natural to be back in a military-style setting.

“I’m still in my early stages of training (as a CAP public affairs officer) and have a long way to go but hope to contribute as much as I can.”

The CAP second lieutenant brings to the table a love of flying, a six-year military background and some 40 years of journalism and broadcasting experience.

A native of Marin in the north San Francisco Bay area, Wayne followed in his father’s footsteps and joined the U.S. Navy out of high school. “I liked to write, and when I heard they had a journalism program I was hooked,” he said.