On January 25, 2011, Capt. Noel Luneau and I went for a training flight that focused on emergency procedures. It has been suggested in the SQ that we should practice this much needed skill, more often.

The weather was clear and the temperature was in the mid 60’s. Calm winds from the West and one nervous Mission Observer from the East. Yes, I was a tad nervous as I didn’t know what to expect. I came from a helicopter back-ground namely the UH-1N Huey. I was a Navy Corpsman (medic) that was attached to HMLA-369 out of . We did two campaigns in the first conflict and were also deployed to , , and . The helicopter was my first love for sure! Graduating to fixed wing type aircraft has been a little challenging for me. Getting used to the turbulence and not knowing if the thing will just drop out of the sky with engine failures and such. Well, after yesterday, I am getting more confident with the fixed wings capabilities. In helicopters, the pilots will use “auto-rotation” for engine failure. It feels like a gentle drop with flair at the end.

Once Capt. Luneau and I briefed on what we were going to do, we went to the flight line to pre-flight and ready ourselves. Capt. Luneau has been my mentor since getting to the aircrew side with CAP in 2009. We have flown together numerous times not only with missions, we also attended NESA together and he was of all things, my instructor there for the Mission Observer track. We’ve also done casual flights in his private aircraft. Capt. Luneau is former military with a long list of accomplishments for himself. He is also our Deputy Commander and works hard with new members to help them succeed in CAP.

The takeoff out of was pretty smooth. I casually asked him on when we can practice some procedures. All of a sudden, he pulls back the power and we dropped (to me it seemed like a mile) and I will never will forget what he said, “Like now? An engine failure?” How quickly my blood rushed into my heart and lungs and the excitement and nervousness kicked right in. That was the beginning. As we approached , he yelled out, “Engine fire!” I hurriedly grabbed the checklist and while I was waiting for commands back, the plane went full nose down (Ed note: One aspect of the Engine Fire checklist is to increase speed in an attempt to extinguish the engine fire). Mind you, he was explaining everything to me on the how and why while we were doing this. I saw the ground and was thinking what I was doing on this flight?


After I got my composure, we went around and caught an ELT signal. We climbed but the signal ceased after about 15 seconds. Capt. Luneau again surprised me with, “Engine Failure!” I was still recovering from the last two scenarios, so here we go again? His skill and calm made the situation so much better. While I was giving out the checklist, he was saying aloud, what he was doing. The propeller went into this strange silent noise and it was pretty quiet all around. We found a field as we were going to practice landing. When we pulled up for full power, I asked him some questions on how a fixed wing aircraft can maintain flight without the engine? He answered all of my questions to where it made sense.

At the end of this trying flight, we went back to to practice my favorite landing maneuver. The Side-Slip and Forward-Slip!! Capt. Luneau introduced that landing when 2d.Lt. Bitz and I went on a training flight last October. What can I say; I have fallen in love with that maneuver! It totally reminds me of a helicopter style landing. We did three of those and I can easily do a dozen or so of those landings. Very fun!

Once the plane was secured, the XO and I debriefed over coffee and dinner. The time I have gotten to know Capt. Luneau has been a positive experience. He knows when to be cordial and knows when and how to put me in my place. I look up to him as he is the pilot and I am his right-seater. I totally trust my life with him as his skills and demeanor while in aerial flight, is what I got to experience when I was active duty.

I would challenge and strongly suggest to any aircrew and pilot, to practice these scenarios whenever and however you can. It’s not fatalistic thinking; it’s just knowing how to tackle something that will be very baffling when it arises. I look forward to the next time I get to practice these tasks as I feel confident that I will be more at ease with each time we get through it.

Thank you Capt. Luneau for giving up some of your time and thanks to all in CAP that makes Squadron 188 such a fantastic family of professional volunteers!

Members of Squadron 188 have continued to upgrade, train, and participate in the full range of emergency services operations in support of Group 2, California Wing (CAWG), and Pacific Region (PCR).  Squadron members made a determined effort in obtaining mission qualifications.  To ensure Squadron members were well trained in aircrew ES ratings a Mission Observer course was held for five members and a Mission Scanner course was held for 15 members.

Squadron 188 members were often the first responders to non-distress beacons and members were awarded finds for four aircrew finds and five Urban Direction Finder (UDF) finds.  Capt Jeff Ironfield and Capt Noel Luneau were each awarded the Air Search and Rescue ribbon for their involvement in ten search and rescue sorties.

Group 2 held three SAREX’s and Squadron 188 members were closely involved in both Aircrew and Base Staff positions.  The highlight of the year, which successfully tested the operational capabilities of the Squadron, was the planning and execution of a two-day five-plane SAREX located in Oakland.  Twenty Squadron 188 members participated in the SAREX in all positions ranging from Project Officer, MP, MS, MO, UDF, GTM, AOBD-T, MSO-T, PIO, CUL, and GBD.  On 18-May-10, Squadron 188 aircrew flew an engineer from East Bay Municipal Utilities in support of the Homeland Security exercise - Golden Guardian.

At the Sep-10 Livermore Open House, Squadron 188 worked closely with Squadron 18 to setup an exceptional static display of an aircraft, two CAP vehicles, and assisted in operating a recruiting booth.  This event proved to be an excellent method to increase the visibility of the Civil Air Patrol, further the Aerospace Education mission, provide support to the Cadet Program, and recruit new senior members to the Squadron.


An aerospace education program was conducted in 2010, to ensure that the Aerospace mission is well represented within the squadron.  Paul Groff, Wing Safety Officer, Phil Blank, Wing DOV, and other qualified instructors were instrumental in the monumental achievement of elevating the number of Yeager Award recipients. Squadron members planned and attended visits of the USS Hornet and the Chabot Space and Science center.  The Squadron flew AFROTC cadets, to enhance our Aerospace mission.  Two flights were conducted from the Oakland Airport for four AFROTC cadets.

Squadron 188 conducted O’Rides for Squadron 18 at Livermore Airport.  This is to ensure that the cadets experience firsthand a flight in a CAP plane.

Finally, Squadron 188 is fortunate to be located in a large facility at the old Oakland Terminal and Hotel.  The Squadron lent out this facility and provided support to CAWG for the National Check Pilot Standardization Course (NCPSC) in Jun-10, and the Mission Pilot Academy – Ground School in Jul-10.

Capt Luneau is Squadron 188's Deputy Commander and is a qualified Mission Pilot.

Capt Demetrius Wren dug up these old Department of Defense movies from the 1970's.  They are quite informative and entertaining.  Have a look at what CAP was doing 40 years ago!

DEFINES THE THREE MISSIONS OF THE CIVIL AIR PATROL: SEARCH AND RESCUE, CADET PROGRAM, AND AEROSPACE EDUCATION. POINTS UP THE CAP AS A CIVILIAN VOLUNTEER NON-PROFIT CORPORATION, PERFORMING HUMANITARIAN SERVICES

PROVIDES TRAINING IN SEARCH AND RESCUE TECHNIQUES TO MEMBERS OF CIVIL AIR PATROL. EXPLAINS DUTIES OF THE SAR MISSION COORDINATOR AND THE NEED FOR EFFECTIVE COMMUNICATION BETWEEN THE COORDINATOR, HIS STAFF, AND OTHER ORGANIZATIONS CONTRIBUTING TO THE RESCUE MISSION.

California crash survivor hopes to return to the skies

This is an article on the one-year anniversary of California Wing's save of Rocky Harvey and Warner Henry in a Cessna 172 on the snow covered slopes of Joshua Tree National Park.
The article is located here at the The Desert Sun website. 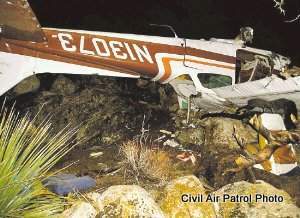 Here is a snippet from the article that describes their crash and the harrowing rescue:

"Finally, he heard the drone of an airplane circling above.
It was comforting to know someone was up there, but no one would reach them until morning, Rocky figured.
No one could be stupid enough to attempt a rescue in such a wild storm.
Rain beat against the airplane, and there was a risk it would ice over if the Civil Air Patrol crew climbed too high.
It was the most difficult search Capt. Frank Tullo had ever conducted."

You will be relieved to know that the two survivors are getting better every day.
Posted by Anonymous at 2:59 PM No comments: