A Number of Firsts 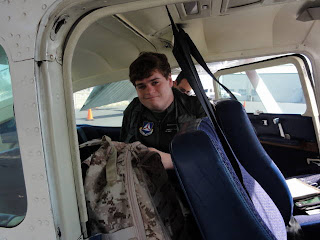 OAKLAND, CA - I started off Sunday, Sept 4 having already attended the Group5 SAREX in Sacramento with 1st Lt Doug Perreira the day before. Capt Frank Riebli, 1st Lt Patrick Bitz and I were planning to fly a training and technology development mission out in the Central Valley. Little did I know we would end up spending more than twice the amount of time aloft than we expected. Instead of working on a number of technology and training firsts for our aircrew, we ended up achieving some operational firsts as a team. We started our flight by departing Oakland Metropolitan Airport after waiting for the fog to leave the runway before we did. At around 1:40 PM when we were wheels up and the fog was rolling back out to the sea lending us clear skies. 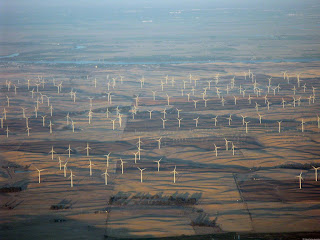 Our target was a valuable piece of infrastructure that was a sensitive location. It was a prominent enough landmark in the Central Valley as to make it a good target for new photographic equipment, as two new techniques were tried today, Long Range Oblique Photography, or LOROP, and In Eye Projection. Using techniques gleaned from Astrophotographers, long range photographs were produced using less than $300 worth of equipment. With a high maximum magnification, detail can be obtained from a distance and at altitude, especially useful in mountain flying or a hazardous environments. With the photography completed, I contacted 1st Lt Luis Rivas using a reprogrammable data modem to test data transfer. Unfortunately, right at the moment I established a connection with Luis, we got a call from 1st Lt Mike Allen over the repeater. 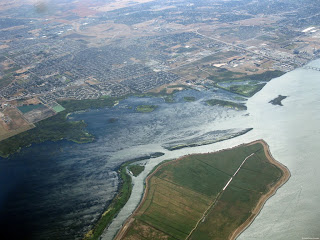 Some days you are in the right place, at the right time ,with the right crew, and about an hour into our flight, that moment came for us. Lt Allen came in on the CAP radio net and informed us that an ELT was being detected, "somewhere along the western coast of the whole United States" to quote him in debriefing. The general area we were directed to was northof the Delta, West of Sacramento Executive Airport where Lt Allen was workingon the Group 5 SAREX. An aircraft with inoperable DF gear had flown around that area, and using wing nulls, gave fixes that hit every corner of the compass rose, which meant our functional plane with a ready aircrew was sent north to hunt down an ELT. Flying north from Crows landing, I noticed we passed over the region of the Delta where the salt water mixes with the fresh water from the Sacramento river; the sunlight illuminated it in a stunning manner as I took a picture. We landed to feed the ever-thirsty CAP aircraft at Yolo County Airport. 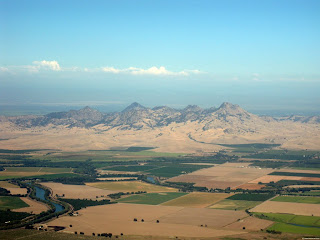 After fueling and watering, we took-off and began our direction finding work by flying North with the DF gear sensitivity set to the maximum. We didn't pick anything up before landing at Yolo County, and we didn't pick anything up until about 15 minutes after we left that area. All of sudden we picked up a fuzzy buzzing. A couple of miles further North and that buzzing becomes clearer, another mile, and the buzz becomes a choppy warble of that familiar tune, an ELT. Homing in on 121.5, we started picking up a much clearer signal. Capt Riebli and Lt Bitz agreed that we should maneuver around to get a good fix. Sitting in the back, I noticed an airport about seven miles distant off the front left hand side. Capt Riebli began to maneuver the aircraft, and while he was looking around the six-pack, I was watching that DF needle. Turning to the left and heading North, the airport distantly in front of us slowly panned across my view moving to the right; at the exact same time, from my point of view, about 8 inches below my vision of the airport, was a little needle pointing dead straight at that airport as it slid from left to right, forever cementing my belief in having good DF gear. With a big grin on my face I pointed to it and exclaimed "aha!" much alike a pirate founding treasure; I was sure the ELT was hiding somewhere on this distant little airstrip.

After some maneuvering and discussion amongst the crew, we informed Sacramento base of our find and fixes. After obtaining clearance to land at what we had come to discover was Colusa County Airport, I prepared the back seat for landing, but not before noticing some majestic mounts off to the East, called the Buttes, a prominent uprising in the otherwise flat central valley. Landing at Colusa, we took in the strong late summer sun as we walked from the CAP aircraft to some of the parked aircraft on the ramp. Making a mental note to put some sunscreen in the survival vest for the next mission, we commenced our search, with Capt Riebli and I carrying portable radios, detuning and bringing the unit close to the skin of the few aircraft on the ramp. Having no success determining what was giving us such a strong signal, we checked all the parked cars, hangers, and then noticed something. While the cars near the hanger didn't check out with the no-antenna test, a hanger about 20 feet from them was giving some fairly strong readings. Walking around the suspect hanger, Capt Riebli stood in between the hanger and the highway, while I walked around another hanger, carefully noting that when I allowed the other hanger to occlude line of sight to the suspect hanger on a detuned frequency, the ELT vanished from my little Icoms speaker. As I trundled across this weedy and seemingly innocuous little airstrip back to Capt Riebli, he had observed something convincing. With his back to the suspect hanger and radio in front of his body, effectively body blocking the signal from the hanger, the trucks from the highway in front of him were reflecting the otherwise blocked signal as they drove by, causing little warbling blips as they passed.

At this point the three of us where convinced enough to call in this little blue hanger to Lt Allen, and then the local sheriff. About 15 minutes later, a squadcar comes up, followed by another. The two sheriffs go up to the suspect hanger and knock, and then open a suspiciously unlocked door, with their hands perched alarmingly on theirholsters; clearly, these officers were wary of unusual circumstances in this area. After an interminable 10 minutes, and two more squad cars arriving, we were beckoned inside. This large hanger had acouple of RV's, a boat, and, surprise surprise, a Cessna sitting with the cowling off, doors open, and undergoing extensive restoration. With even the baggage door visibly open from standing at the door of the hanger, I had myradio at 122.220, and with almost no signal outside, the second, I put my arm holding the radio inside the building it went to maximum signal strength. After securing the ELT, which apparently had developed a faulty Arming switch, we readied the CAP aircraft for the trip home. 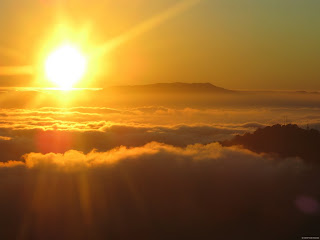 As we hauled the old bird South to get home before sunset, we hooked back around over Concord, then took a path that would allow us to beat the fog crossing the bay attempting to smother the Oakland airfield. As we were slipping inbefore the weather and sunset ended another day of successful flying, I managed to snap some interesting shots of the setting sun across a sea of fog stretching over San Francisco and the ocean.
After an uneventful approach and landing, we high fived each other for everyone's first mission as an aircrew, everyone's first find, everyone's first time working together, Capt Riebli's first mission as mission pilot, Lt Bitz’s first mission observer flight, and my first mission scanner mission. We had a pretty good day, things went smoothly, and there were only a few constructive takeaways from Sunday: